Ben is a working Springer Spaniel who suffered a rupture of the cranial cruciate ligament in his right stifle (knee) joint. Ben was referred to a specialist orthopaedic veterinary surgeon who performed a TPLO (tibial plateau levelling osteotomy) operation to stabilise the joint.

The main aims of Ben’s physiotherapy treatment were to increase muscular support and facilitate full range of movement of the right stifle joint. Another important aim was to increase weight bearing on the injured limb in order to relieve the additional pressure being placed on the opposite stifle joint due to compensatory weight shifting.

Ben was treated with Low Level LASER Therapy to the right stifle joint to promote circulation to the area and accelerate the healing process. Passive range of movement and weight shifting exercises were performed to encourage weight bearing and full joint movement. A home exercise plan was also devised for Ben which his owner completed between sessions. Ben then progressed onto hydrotherapy treatment to further aid muscle strengthening.

Ben’s owners were committed to his recovery and through the implementation of a multimodal approach to treatment including surgery, physiotherapy and hydrotherapy, Ben made excellent progress. Over a year later he has made a full recovery and is back to working as a gundog, regularly out beating and picking up on shoots throughout the season. 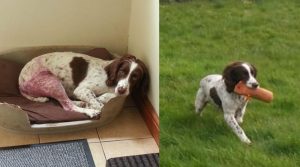