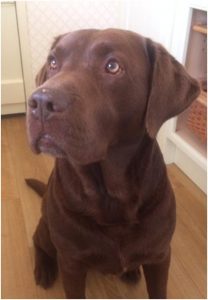 Alfie is an 8 year old chocolate Labrador Retriever with elbow dysplasia who had also previously been diagnosed with spondylosis of the spine. He initially had arthroscopy surgery on his left elbow but his lameness did not fully resolve and so he subsequently had a partial elbow replacement.

Alfie was referred by his vet for physiotherapy following his elbow replacement surgery. On initial assessment, Alfie presented with reduced muscle bulk over his left shoulder and there was still a degree of lameness on the left forelimb which was worse when he trotted. He was also tending to offload weight from the left forelimb when standing, causing him to take extra weight through the right forelimb.

The aims of Alfie’s physiotherapy treatment were to maintain full range of movement in the left elbow, increase weight bearing on the left forelimb, strengthen the left shoulder muscles and address any areas of muscle tension in the right forelimb due to compensatory movement. His weekly physiotherapy programme included the use of LASER, soft tissue massage, stretching and land based exercises targeted at encouraging even weight bearing on his forelimbs. He later progressed onto hydrotherapy.

Alfie made good progress, his lameness gradually improved and he is now able to tolerate longer walks again. He continues to attend hydrotherapy sessions for maintenance.